Back to Media Centre 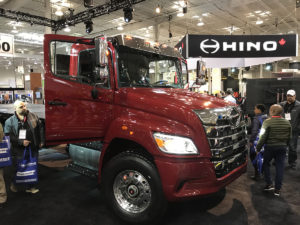 MISSISSAUGA, Ont. — There is a saying that you should go big or go home. Hino Trucks has answered the call with the Canadian reveal of its XL Series.

The event at the Truck World trade show officially marks the company’s entrance into Canada’s Class 8 market. “Arguably, something no OEM has done successfully in the last five decades,” said Mark Lorentz, vice president of sales.

Trucks for Canadian buyers will be assembled at an expanded Hino facility in Woodstock, Ont., with a “built for Canadians, by Canadians philosophy,” said Yumiko Kawamura, president of Hino Motors Canada.

The facility has been expanded to make room for a trim line, while the assembly line has also been realigned. “It’s quite a significant investment for Hino in Woodstock,” said Lorentz, although the value of the investment has not been released.

Front axles will have gross axle weight ratings of 12,000 to 16,000 lb., with rear axles at 21,000 to 46,000 lb. Wheelbases will run 217 to 298 inches. It’s essentially the same model that will be assembled in the U.S. market in West Virginia. “Basic spec’s are the same. We’re just putting different combinations of spec’s together,” said Lorentz.

“This is truly an exciting moment for all of us,” said Eric Smith, senior vice-president of sales and customer support, referring to the half million engineering hours behind the product, most of which were completed in North America.

Hino is also expanding its global research and development capacity through a new agreement with Volkswagen Truck and Bus.

“It’s been defined as looking at future technologies, future powertrains, and could include things as far as telematics,” Lorentz said. “There will be more to come from Hino Motors and Volkswagen Truck and Bus at a later date.”